Would you like to switch to the accessible version of this site?

Don't need the accessible version of this site?

Send Us An Email Today

Welcome to Our Practice

Welcome to Robin Henderson DDS Clarkston office of Dr. Robin Henderson. We are glad you have chosen us for your oral health needs and hope that every encounter with our office and staff exceeds your expectations. We know our patients have a choice in Clarkston dentists, so we go out of our way to deliver the level of dental care and compassion we would want for our own families.

We are committed to providing comprehensive care utilizing the most recent advances
in the science & art of dentistry with an emphasis on education,
preventive care & esthetic dentistry

We place a tremendous emphasis on education both for our patients (Patient Education) and our team (Our Dental Team.)

You’ll also find our office to be equipped with amenities designed to make your experience more pleasant and enjoyable. From a comfortable waiting area to relaxing treatment areas, every detail has been designed with your satisfaction in mind.

Dental technology is ever-changing and constantly evolving. We do our best to stay relevant to the needs of our patients using advanced technology that helps us better diagnose and treat oral conditions and diseases. Our office features innovative oral health technology that makes it possible for us to provide unsurpassed patient care not available just a few years ago including digital x-rays, in office CEREC crowns. computerized record keeping and advanced sterilization systems.

2015 Sedation Safety Dentist of the Year.

What Our Clients Say About Us

The ADA Council on Dental Practice announced the winner of the inaugural Design Innovation Awards, which recognize excellence in dental facilities that seamlessly combine esthetics appeal, function and design. 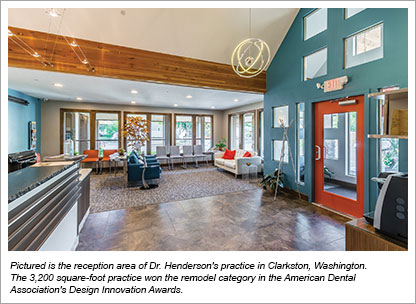 The winner in the “remodel” category went to Dr Robin Henderson of Clarkston, Washington.

The practice received the most votes at the ADA Practice Excellence area on the Exhibit Hall floor during ADA FDI World Dental Congress in San Francisco. The ADA Council on Dental Practice had narrowed the field of applicants down to the top three contenders in each category. Annual meeting attendees who viewed the finalists’ submissions voted for a winner in each category.

Judging criteria for the contest included esthetics appeal, such as use of color, light/windows and theme; utilization of technology; function and efficiency; innovation; and how well the design has accomplished the entrant's objective.

Dr. Robin Henderson's office is a 3,200-square-foot practice that was formerly a longtime chiropractor’s office. Today, the practice includes an area dedicated for the dental team with large private lockers, kitchen, break and conference rooms.

According to Dr. Henderson, the remodel design began with a focus on the new patient experience. The practice’s new patient room includes glass walls adorned with a large fingerprint, which serves as a reminder that each patient is unique and deserves a unique treatment plan.

"I wanted an office that better reflected the level of care provided by my team, that accommodated a digital workflow and improved access for my patients," said Dr. Henderson, adding that winning the Dental Innovation Awards is a meaningful recognition to those who worked on the project. The renovation began in November 2016. The practice began seeing patients in September 2017.

"This isn’t just a win for my practice, but for our entire community, which makes it so much more rewarding," Dr. Henderson said.